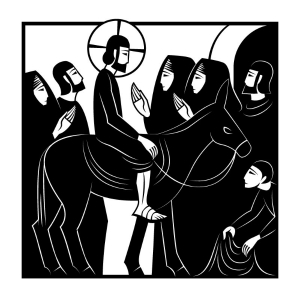 When it comes to early April in Michigan, today is a perfect springtime Saturday. Sixty degrees with clear skies is a gift to be relished. Such days beckon many to scour garages and sheds seeking gloves, rakes, yard bags, and pruning shears.

As buds and bulbs re-activate, tomorrow begins a week of death. A time of remembering when Hope was pierced by thorns, hung with iron, and sealed with stone. But before we thumb to week’s end, let’s dwell in chapter one. Let’s celebrate a King in royal procession on branches of palm.

In preparation for Palm Sunday, I return to an excerpt from my March 26, 2015 post titled “Colt Rider.”

[It was] the arrival of a King, marked indelibly on history’s pages with hoof-crushed palm fronds. Wobbling with the jagged tempo of his bare-backed donkey, fanatic accolades bombarded Him: “Hosanna! Messiah! Deliver us! Lead us into freedom’s peace! Usher in your prosperous reign!”

Immersed in His passion, the Rider acknowledged their good and right desire, well aware that days later these same mouths would erupt with rage-filled screams of “Crucify!”

Like them, we can be fickle rebels. Hapless self-seekers, unsatisfied in our quest to satiate our longings. Toiling in a barren sin-winter we are worn, feeble, sick, and lame. We long for the rejuvenation of springtime. A fresh breath for our soul.

Mark Buchanan writes, “Springtime brings the consolation of hope.” (Spiritual Rhythm, p.84) A hope not for new blooms and warm breezes, but the surety of an ever-fresh springtime of heart. A glorious hope embodied by the colt-riding man from Nazareth. The Lord of spring, King Jesus.

“And they brought the colt to Jesus and threw their cloaks on it, and he sat on it. And many spread their cloaks on the road, and others spread leafy branches that they had cut from the fields. And those who went before and those who followed were shouting, “Hosanna! Blessed is he who comes in the name of the Lord! Blessed is the coming kingdom of our father David! Hosanna in the highest!””
Mark 11:7–10, ESV